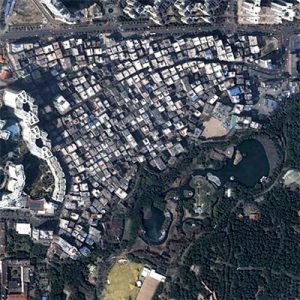 Urban villages are enclaves that have emerged as a direct result of the difference in policy over land-use rights between urban land and rural land. In developing cities such as Shenzhen, development forces come from both top down formal processes and via the mechanisms of rural villages. Entrepreneurial and speculative, the urban villages provide an alternate urban realty to that of the generic city, providing super dense migrant housing, black-market services such as prostitution and gambling, and often have distinct ethnic identities. As the generic formal city expands, the urban villages become islands of difference within a sea of similarity. In a certain way this mirrors the “One Country, Two Systems” policy that the Mainland government utilizes for irregular political and legal entities such as Hong Kong and Macao. Urban Villages operate in a similar way within the construct of the city as “One City, Two Systems”. They have evolved through differences in citizens rights’, land development, political organization, housing types, and economic exchange, yet, the two systems – the formal and informal – are interlocked into a relationship of codependency whereby one is necessitated by the other.