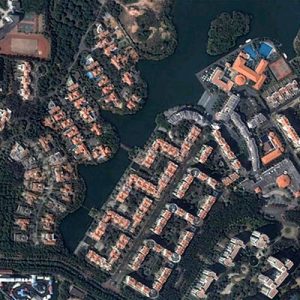 The middle-class in China has yet to be defined. Pre-1978 everyone was considered to be equals. Since then, the economic restructuring has produced many wealthy people, some of whom used to be farmers. Some of these villagers have become rich by building houses for migrant workers, or by starting up their own business, or through renting land to developers and factories. The emergence of a stratified income sector of the population, has led to a demand for lifestyle choice, in many respects to reinforce and represent this change in financial status for this aspirant group. This has resulted in the creation of suburban typologies such as golf real-estate developments, gated tower compounds, theme-parks, and shopping malls. Unlike the out-of town model these developments exist within the urban development of the city. Designations of “good” versus “bad” districts are not yet the primary drivers of real estate speculation as found in many western cities, yet these property islands are often demarcated, walled and securely segregated from their surrounding urban context. As the number of the middle-class increases in China, how this group of people decides to live will have a profound effect on the evolution of the city, dramatically impacting consumption patterns, energy usage and economic growth.