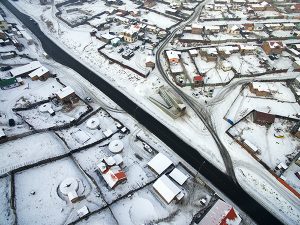 The prototype was to design a waste collection point. For rural nomads, waste, in the form of plastic bottles, glass and cans is an unfamiliar urban phenomenon and without clear systems of collection, garbage accumulates in gulleys, roadside verges and streams. The Asia Foundation identified the worst areas for rubbish build up alongside certain neighbourhoods or Khoroos that they had forged good relationships with local leaders. The aim was to create a demonstration project that could facilitate the hygienic collection of rubbish. They named the project Smart Collection Points as the project had to engage neighbourhood participation and outreach; improve the scheduling of trucks; and influence policy from the Mayor’s office to alter how they administered city-wide waste collection.